Image: A very sexy-looking woman with an alluring body, and inviting eyes. She frequently changes her looks and style, but it normally has a rebellious feel to it. She never follows fashion trends, she dictates it.

Roleplaying Notes: She is always cool and in control of her own emotions. She has a knack of making people feel important when they are around her.

Background & Faction (Scumborn and socialite): She was born into poverty, and lived among the lowborn until her teens. Then she started on an unforgettable rise on the social ladder, starting with a career in exotic dancing. By sheer looks, determination and intuition she soon landed a job as an extra in different holoshows. She then earned her fame by dating the infamous rockerboy called Silver Spike for two years. The relationship ended when he committed suicide/overdosed, but she continued to stay in the limelight through association with up-and-coming new artists. Meanwhile she worked on her own career, mostly through modeling but also some acting. Today she is highly respected for her own work and creative talent.

Her latest relationships includes the famous drug-abusing photographer Victor Luna, and one of the most sought-after deejays on the night club scene in Elysium – Jon Jungel. There is also some rumors that she is courted by the former Olympic champion of freefalling Einhjard Eriksson. She is also an important figure among the anarchists, and has lately worked as a public spoke person for the movement.

Gear: Her entourage and a fashionable purse with everything a modern martian woman needs.

The real person in the picture is Agnete kjølsrud, vocalist in Djerv.
Posted by Toadface at 22:43 No comments:


I left my trusted truck in the hands of one of the nomad krawls, and met up with Alfred and Tor-Erik Erikssons. They needed someone that could get them inside of the quarantine zone of the Hanging Gardens – at last a worthy challenge. After some skullduggery in Elysium City they finally made a deal with the corporation called Ephemera. The result was that a tech operative joined our expedition, and of course she had no training in martian survival. There seems to be few around with my expertise, so I am certain there are credits to be made by doing this kind of stuff.

I procured the necessary vehicles for the operation from the Nomad Nation – the medicines provided by The Erikssons was more than enough to barter with. After that I did a bit of recon together with the Ephemera operative, and we found a route that was navigable by night. The intrusion went without a hitch – I guess the tags we got from Ultralohft helped a lot.

Alfred Eriksson and the operative got us inside the dome, and from there it was just a question of running fast enough. I am have no idea how, but the local AI seemed to have some kind of control of the inhabitants by the injection of some kind of virtual drug. They were mostly harmless as long as we kept our distance. In the end The Erikssons found what they were looking for, and we actually got away with the data slates - and we did not need to kill too many of the flesh drones?  Hopefully they can use what we found...

Posted by Toadface at 20:26 No comments: 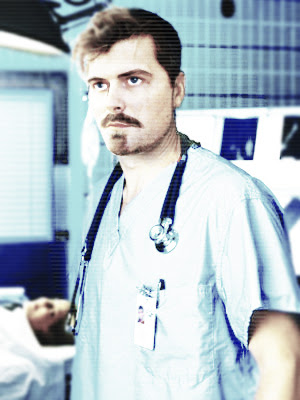 N.E.R.A. contacted after situation cools. All data (except for personal log) shared with operatives upon arrival. Request that Eriksson CyGen should be involved in follow up handed down to Kai Wei Eriksson.


Personal note: religious experience when facing Easter Island God led me to believe I was able to summon divine powers of clairvoyance - I was mistaken. I sense a growing conflict between psi-"powers" and personal scientific world view. Self-medicating against growing paranoia.
Posted by leketoys at 22:33 No comments:

Who is Mars Jesus? 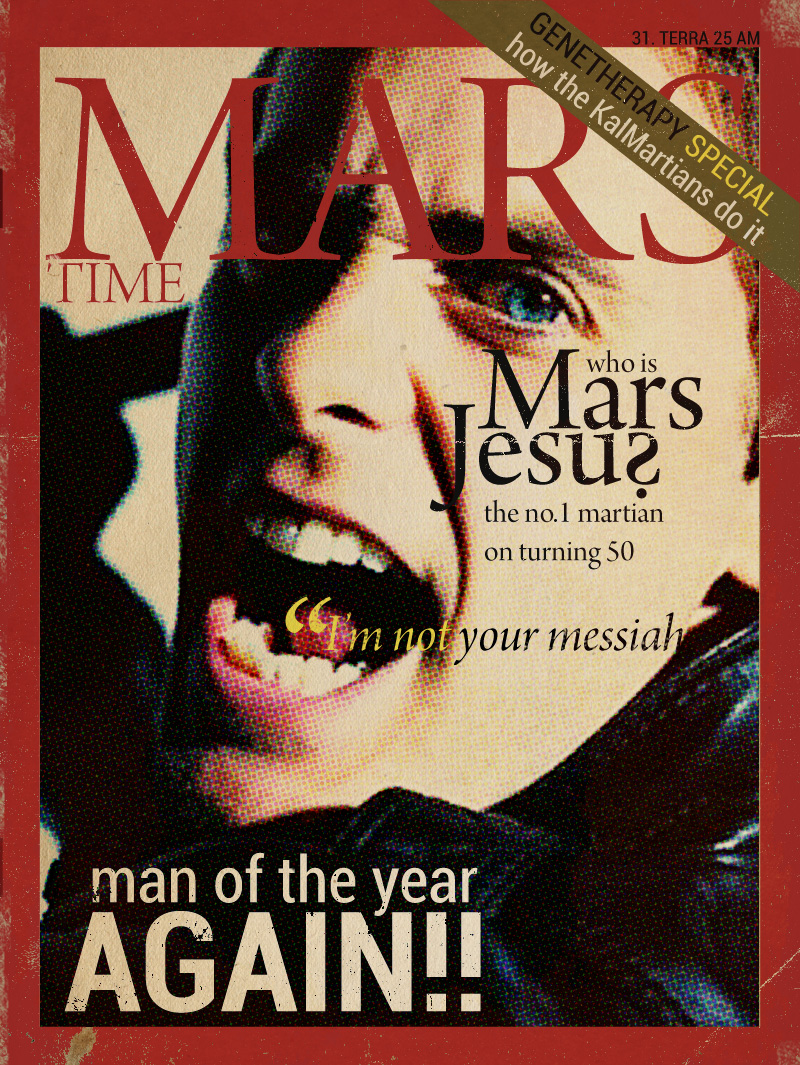 Posted by leketoys at 22:06 No comments: 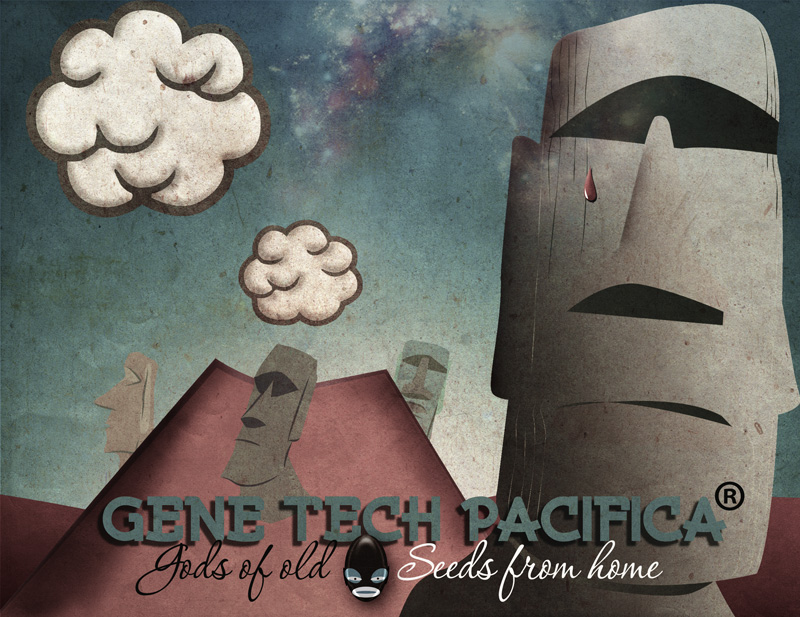 After last time ordeals, the Erikssons decided to retreat to the safety of Stein Fjellberg’s truck – waiting to get a complete scan of the unexplored system of caves beneath the safe-shelter. The debris of the hole seemed to have caved outwards, indicating that something had broken out from the caves – something that some of the siblings found quite horrific. They managed to map the general outline of the caves, but they unfortunately lacked the equipment to make a proper scan for any form of life. If they wanted to find out what was in there, the only option was to go in themselves.

Meanwhile the six captured replicants dies more or less at the same time, something Tor-Erik finds intriguing. He discovers with the help of Munin-1 that this particular model of replicants should have expired four years ago. Tor-Erik's analysis indicated that there could be a connection to the p-string infection, holding them alive longer than their programmed age. They are also baffled by the fact that the remaining replicants behaves in a hive-mind pattern.

They made some final preparations before entering the cave, like injecting themselves with a cocktail of combat drugs – something that woke an old hunger in Einhjard, as he once had been addicted to the stuff. Tor-Erik also tried to prepare them for another psi-attack. He had little practical knowledge with the subject, so what the effect would be was uncertain. It was decided that Einhjard and Idunn would lead the attack on the around 25 replicants remaining in the caves. The rest would wisely follow from a little distance, but not too far away.

There were five or six replicants that seemed to malfunction more than the others – resulting in a surprisingly aggressive behavior. They had positioned themselves behind a pitfall, and were armed with homemade crossbows – not that it frightened Einhjard and Idunn as they charged, intending to jump the pitfall. Too late Einhjard spotted the thin and almost invisible steel wire strung across the pit, and so his jump was abruptly stopped half-way. He fell into the pit head first, and he found himself soaked in gasoline – not that he cared that much, high as he was on combat drugs. Meanwhile Idunn used all her dance and fighting skills, gracefully avoiding the wire and engaging the replicants in close combat. She quickly neutralized all resistance, but one of the replicants managed to throw a flare down into the pitfall. Luckily Munin-1 had already taken action, and helped Einhjard out of the now burning pit. Angrily the ex-athlete decided that at least one of the replicants had to die, and so he quickly impaled one of them with his cold steel claws.

Alfred and Stein quickly put the fire out with the help of a couple of old fire extinguisher they found in the safe-shelter, and the party was once again ready to investigate the rest of the caves. They were greatly surprised by what they stumbled upon next, a big statue like the ones found on Eastern Island back on earth. There was also an altar in front of the statue, indicating some kind of worship. At that point it seemed that Tor-Erik lost it, as he suddenly was trying to summon some kind of divine help – it was unclear if this was due to religious motifs or an attempt to use some undefined psi-power. It was almost too much for Einhjard’s already drug-troubled psyche, but he managed to keep focused.

What they discovered in the next chamber was even more mind-blowing – a mummified but still living replicant chained to the wall with shackles. It seemed that something was keeping the body alive, and once again the leading theory was the p-string virus. After herding the remaining replicants out of the last chamber, they found also there evidence of something that once had been chained up in shackles – though whatever it was it had escaped some time ago.

After some discussion it was agreed upon to deliver the discoveries over to N.E.R.A, though not everyone was found of the idea. Alfred especially voiced concerns towards being the lapdog of N.E.R.A. Not long after they called in, two black helicopters appeared. With them were two squads of soldiers taking charge over the situation. Glad to be rid of the problem the Erikssons finally could concentrate on finding some nomads.
Posted by Toadface at 14:12 4 comments:

This blog is mainly about roleplaying. The voices found herein are that of players and storytellers.


Our current game is about the Erikssons - a dysfunctional family of the future. They live on Mars, they deal in implants, they are driven by vengeance and deeds of dark heroism.


The system is Eclipse Phase in an alternate timeline some years before the fall. The setting is more cyberpunk, the tech level less nano, the story is our own.


If not mentioned otherwise, all illustrations on this blog are made by leketøys.

This work is licensed under a Creative Commons Attribution-NonCommercial-ShareAlike 3.0 Unported License.